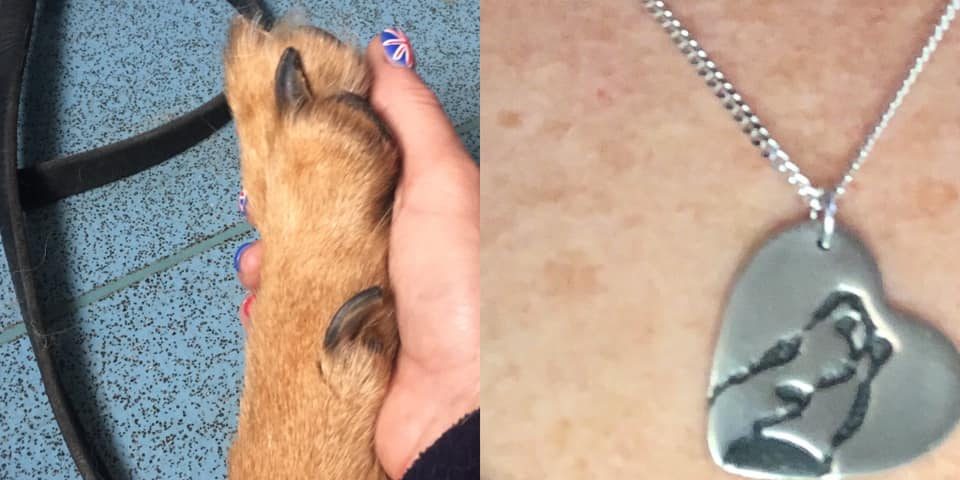 I would like to share with you a heart warming story of a beautiful dog called Xara.  Xara’s owner Jane contacted me towards the end of 2019 asking if I could create a special keepsake for her as she had sadly had to say goodbye to her beautiful dog and best friend Xara.  Sadly Jane did not have Xara’s paw print but she did have an incredibly special and emotional photo that meant that absolute world to her.  Jane wanted to know if it would be possible for me to capture this special photo in a silver charm that Jane could keep close to her heart and treasure forever.  I took a look at the photo and the emotion it held was immense, I could see why it was so precious to Jane, it held a memory that she would hold close to her heart forever.

Capturing a precious memory in silver

I had never captured a photo/image in a silver charm before but I was determined to try my best to achieve this for Jane, for I could see how much it meant to her.  I had a few ideas on how it could be done and I did some tests at different sizes. It worked out best having the image a bit bigger so we opted to capture Jane’s special photo in a large silver heart charm.

Xara – such a beautiful soul

I emailed Jane recently to ask her to share with me Xara’s story, what kind of a dog she was, her personality and what led Jane to capture this incredibly emotive photo that she now holds very dear.  I will show you below what Jane shared with me.  I have literally copied and pasted this from her email as she captures Xara’s story perfectly.

Xara was almost 12 years old.  We got her at 9 weeks old and she had an amazing life.  We live on a small holding with our horses, another dog and cats.  She had so much freedom, loved being outside with us all the time, either at the stables or up the field.   We lost our other dog Blue 4 years ago and she grieved for some time.  We too, missed him so got her another friend, Red (I’m not very adventurous with names :)).  She was so good with a super excited puppy who didn’t leave her alone for a minute.  They became best friends.  She enjoyed the quiet life in her later years and would just lie in the field and watch over everything.  She really was a beautiful soul and even in her younger years, she always seemed to have an old head on young shoulders. She was a big dog with strong features, who could look quite intimidating but she was the most gentle dog.

Her passing was very sudden and unexpected.  I had gone to the US for a horse trip with friends and the day after I returned home she had a seizure, we took her straight to the vets but she had another seizure there.  I thought the kindest thing for her was to let her go.  I believe she waited for me to come home, to go.   She was such a proud dog and as heart breaking as it was for me to make this decision, I wanted her to go with dignity.  I laid on the floor with her and held her paw so she knew I was there, that’s when I took the photo, knowing this was our last moment together.

A lady at work gave me the link to your website as she had a paw print done of her dog.  I knew I couldn’t do that now and that’s when I contacted you about having my photo put onto a necklace. I wasn’t sure if it was something you could do but you did it.  It’s amazing and so beautiful to me.   I haven’t taken the necklace off once and I feel that Xara is with me always now.

I can’t believe how much this has made me cry writing this.

Xara and Jane’s story really struck a chord with me and I was incredibly honoured to be able to capture such a special memory, their last moment together, in silver forever.  Reading Jane’s story has got me thinking that there are likely other pet owners out there who would love to capture there own “holding your paw” moment and be able to keep it close to their heart forever.  I have added a new charm option to the website in Xara’s honour so that other pet owners have the chance to have their “holding your paw” moment forever captured in a silver charm.

If you would prefer to capture your pet’s unique paw print in silver I can help with that too with a range of silver paw print jewellery designs.

Recent Posts
Recent Comments
Archives
Categories
Meta
Go to Top
We use cookies on our website to give you the most relevant experience by remembering your preferences and repeat visits. You have the choice to either consent to their use or opt-out.
Cookie PolicyCookie settingsACCEPTREJECT
Manage consent

This website uses cookies to improve your experience while you navigate through the website. Out of these, the cookies that are categorized as necessary are stored on your browser as they are essential for the working of basic functionalities of the website. We also use third-party cookies that help us analyze and understand how you use this website. These cookies will be stored in your browser only with your consent. You also have the option to opt-out of these cookies. But opting out of some of these cookies may affect your browsing experience.
Necessary Always Enabled
Necessary cookies are absolutely essential for the website to function properly. These cookies ensure basic functionalities and security features of the website, anonymously.
Functional
Functional cookies help to perform certain functionalities like sharing the content of the website on social media platforms, collect feedbacks, and other third-party features.
Performance
Performance cookies are used to understand and analyze the key performance indexes of the website which helps in delivering a better user experience for the visitors.
Analytics
Analytical cookies are used to understand how visitors interact with the website. These cookies help provide information on metrics the number of visitors, bounce rate, traffic source, etc.
Advertisement
Advertisement cookies are used to provide visitors with relevant ads and marketing campaigns. These cookies track visitors across websites and collect information to provide customized ads.
Others
Other uncategorized cookies are those that are being analyzed and have not been classified into a category as yet.
SAVE & ACCEPT